Angela Page and Liza are the joint owners of Pepper-Pot and have been trading since 1988. Here is a little about our history over the past years.

Pepper-Pot Playgroup opened in September 1988 and was based at St Luke’s Infant School, Brighton. In July 1993 the group was forced to close as the school required its prefab hut as a classroom.

Elm Grove’s Pepper-Pot Playgroup opened in November 1992 and was based in the former domestic science building next door to Elm Grove School, Brighton. In September 1998 this building was fully converted into a baby unit, providing spaces for babies aged from three months. In January 2013 the unit was flooded. Following complete refurbishment it opened in March as a pre-school for children aged three to school age. Due to covid the pre-school closed in March 2020, then reopened in October 2020 as a full refurbished baby unit.

Pepper-Pot Nursery Ltd opened in May 1995 and is based in the Lower Hall of St Wilfrid’s Church Hall, Brighton. The nursery has sole use of this part of the building; the facilities are not shared with anyone. The nursery was refurbished in April 2013 to create a room for babies and toddlers and a separate room for two- to three-year-olds. Future plans include creating another garden so that all children can wander freely to the outside play area. Due to covid in June 2020 we reopened this site for 2 years + children and the pre-schoolers. 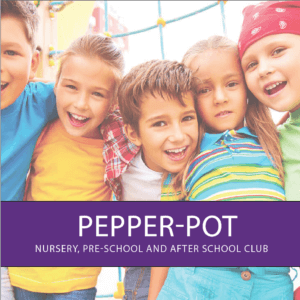 Pepper-Pot Nursery and Pre-school is dedicated to providing first class care for every child in the Brighton & Hove area.